Mohau is a very funny person - sometimes intentionally, sometimes not so much.  One day, though, his self-awareness and then lack of such was both shocking and hilarious. 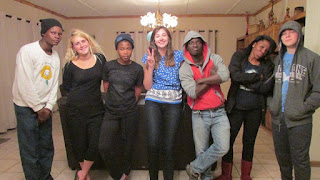 We had two young ladies from the U.K., Meg and Florrie, ministering with us for a few months.  Mohau developed quite an "affection" for Meg.  And by affection I mean a pretty big crush.  One day he tells me that he had asked Meg on a date and she had accepted.  Surprised, I mentioned it to Meg the next time I saw her.  She also seemed surprised.  Turns out, when a group of the young people were hanging out at one of the youth member's house, Mohau had mentioned to her that "this is fun" and "we should do this more often."  Apparently, this was an invitation to a date.  So when Meg agreed that it was fun and they should do it more often, this was also an acceptance of the invitation.    The next night after youth group Meg pulled Mohau to the side to have one of those "Clarify the Relationship" discussions. 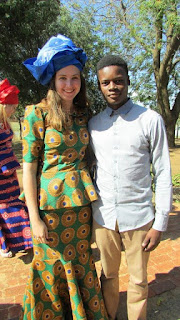 Every Thursday is Hospitality Night at the O'Tool's house, which is a chance for some less formal discipleship and fun together.  During dinner discussion a girl who was attending one of our Bible studies at a local high school came up.

Mohau looks up from his plate and says to me "You know I have a history with her, right?"
Knowing Mohau's tendency to quickly develop fondness for members of the opposite gender (Note: There are only two genders), I respond to his question with a question of my own.
"Mohau, who haven't you had a history with?" I said.
Without missing a beat, Mohau looks directly at Meg, and completely deadpan, in front of everyone, says "Well, Meg apparently!"

Now, Meg is from the U.K.  If you know anything about England, you're probably aware that they only get like 12 days of sunlight per year.  So most people from the U.K. are pasty-white.  But in this case, she wasn't pasty-white.  She turned a bright shade of red...purple almost.  His timing was absolutely perfect!

Later that night he carried on with his comedy routine, only this time unintentionally.  Mohau chose to ride with me as we made the rounds to drop our guests off.  Ostensibly it was for added security.  But again, Mohau's general sentiments about young ladies in general, and Meg in particular, probably prompted this particular display of paternal protective instinct.  Anyway, as we're driving Mohau mentions that he's working to maintain his single status so as to not interfere with his grades in this, his final year of high school.

Mohau has a fantastic vocabulary.  I'm talking, wrinkle-your-forehead and make-you-think dimensions.  The thing is, as he tries to find the most perfect, obscure word to fit his context, he sometimes uses a word at the very outer edge of its semantic range.  Which never ceases to crack me up. 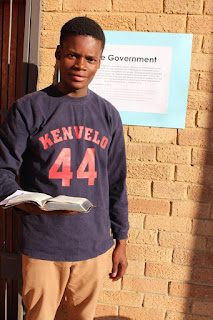 Well, in his efforts to properly describe how he's trying to maintain singleness, he says "I'm working very hard to make a eunuch of myself."  The immediate mental picture of which nearly made me snort and swerve the car off the road.  See, in his love for language and reading of Scripture he came across the word eunuch in Matthew 19:12.  And that verse uses the term eunuch in a way that is outside the normal understanding of the word.  But not knowing the normal understanding he arrived at a correct conclusion in regards to application.  But the semantic imagery his particular choice of words evoked caused me to chuckle quite heartily.  Which then made everyone wonder what was so humorous about his choice of words.  Turns out, eunuch is not a word that most millennials are familiar with.  So none of these young people knew what it meant.  Which put me in the awkward position of both explaining the origins and meaning of the word, and then waiting as everyone put two-and-two together...the meaning of the word with Mohau's statement about "working hard to make a eunuch of himself."

Oh, the joys of working with young people!